I don’t know why exactly but I had a strong urge to make a terrarium today! I’m not particularly known for my horticultural skills but having seen some rather lovely examples on Pinterest, I decided it was time to give it a bit of a go. I went to the local Dollar King and bought myself a small fish bowl, a little bag of stones and I was all set.

And here is the result: 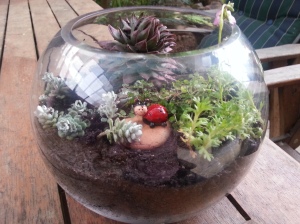 The plants were all bits and pieces I got from our own garden and I’m hoping the sedum will grow and spread out a little but all in all I was pretty happy with it. I think actually I want to make some more! 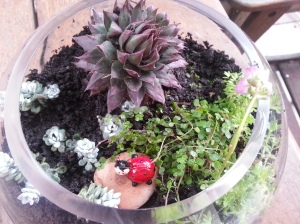 On another flowery topic, I was given the task of pricing up some items for the upcoming market at the Pioneer Church. I was given two enormous soup mugs and rather than just stick a price on them and hope that they sell I decided to play with some artificial flowers that had been sitting there doing nothing to see if we could jazz them up a bit. Here they are post jazzing! 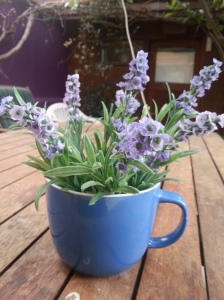 So there we have it, I have been absent for so long (and have missed my little blog and bloggy friends) but as Spring is definitely under way in this part of the world, I thought it might not be a bad idea to do something sufficiently Springy!

It was over a week ago now but I wanted to share a couple of photos with you from the Pioneer Craft Market held at the local church in Cheltenham. Our little group gets together every Friday morning and a lot of knitting, crochet and hand sewing gets done while we chat and have a cuppa together. Twice a year we hold a market and sell some of the things we have made over the year and the money raised goes to a variety of causes such as: Flying Doctors, The Fred Hollows Foundation, SIDS and Kids and the Leprosy Foundation. This time round we managed to raise about $1500 which gave us all a bit of a warm glow!! 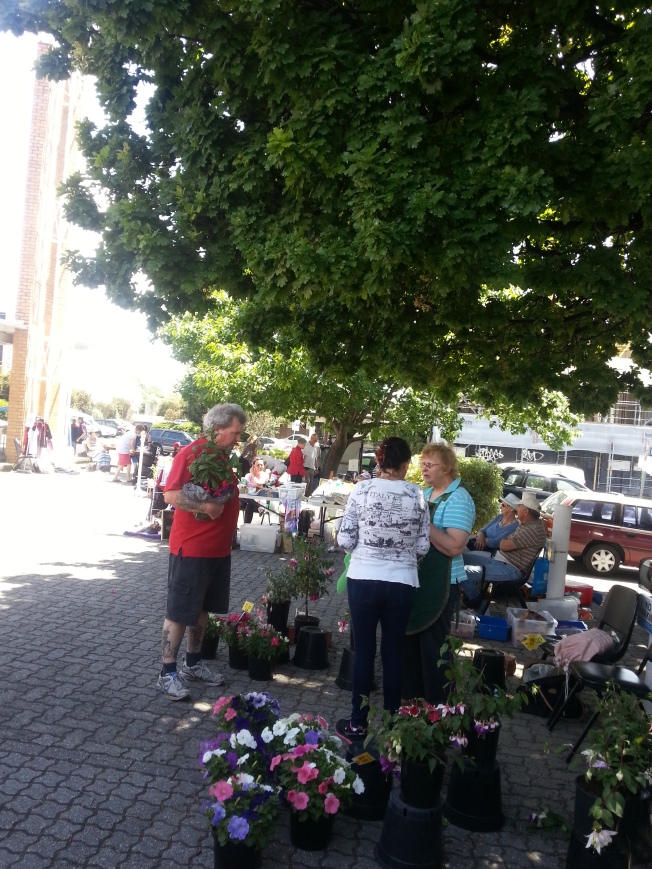 Even the sun shined for us! 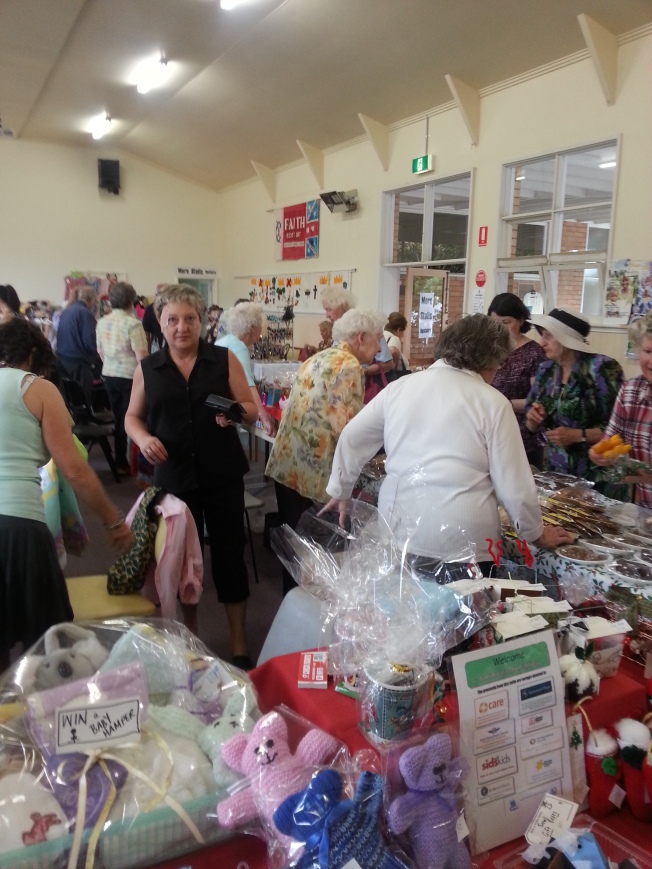 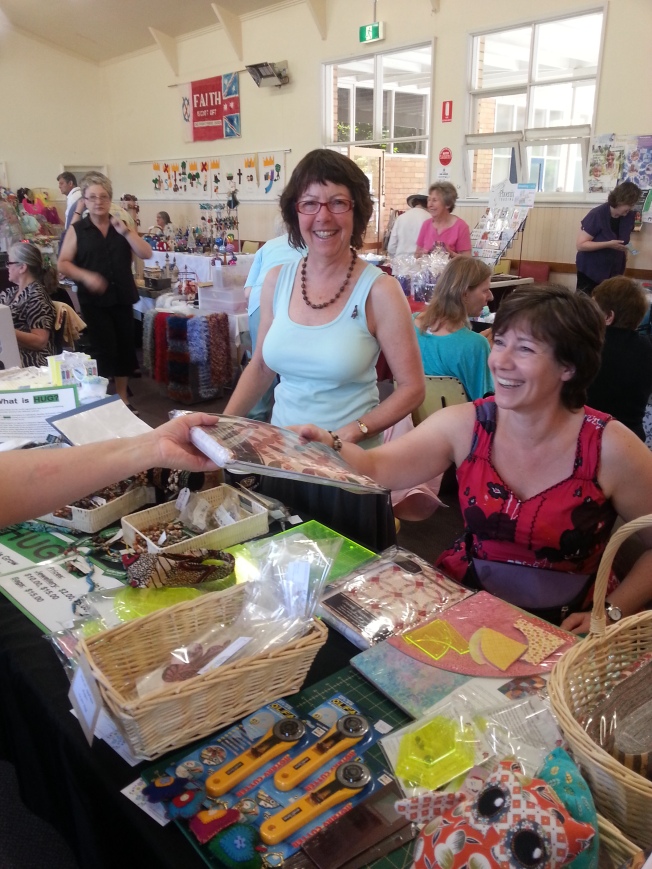 My friend Carrie and I shared a stall with me selling my craft supplies and she selling some of the lovely Suubi village jewellery and bags for HUG (Help Us Grow) I can proudly tell you that the HUG stall (added to sales made after the OLA Church mass on Sunday) made over $600! which is pretty substantial considering every cent raised goes directly to the maker of the item – every item is labelled and all sales written down so we know who it goes to.

All in all a very satisfying day!! 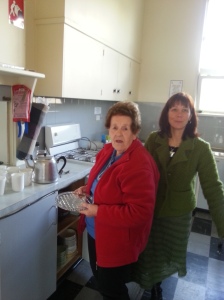 Tea duty for Dot and Kelly

Its Friday morning and looks like winter has returned with a vengeance  – gales blowing, rain hammering down.  Not to worry, with all those busy fingers and cups of tea its not too hard to keep warm. 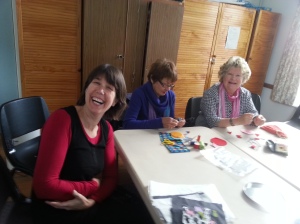 Sally’s working on one of her many baby blankets although this one is rather special as its for her first grandchild, due very soon.  Its a lovely pattern and looks like separate squares but in fact is knitted in one piece. 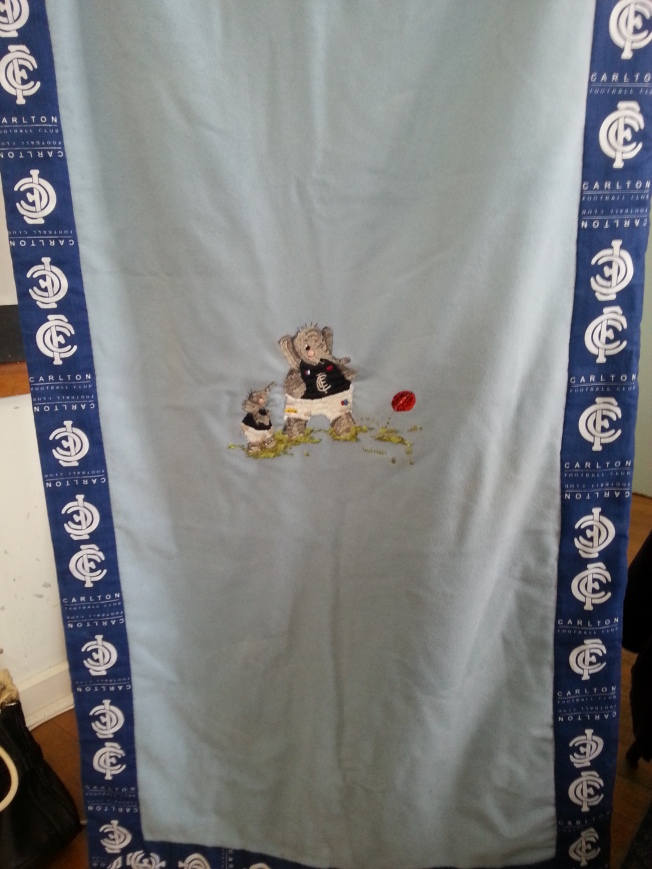 New member Susan shared with us the two lovely baby blankets she’s been making.  The elephant one above which is for an avid Carlton supporter (even if he doesn’t know it yet)!……

….. And this lovely panda blanket with 3 dimensional pandas.

Living creatively, brings abundance into your life. I enjoy all forms of creativity, learning new crafts and sharing knowledge. Feel free to look around and I look forward to reading your comments.

I have issues. With crafting. Among other things...

blood, sweat, and glitter y'all

It's all about the crafty

Ali Does It Herself

\ˈprä-JECT-oh-fahyl\ (noun) 1. A lover of projects, especially those derived from scavenged materials and made more beautiful through paint, thread and sandpaper.

crafting,dachshunds including other bits & bobs

home is what you make it
the doodle house

A gleeful account of 2 native Texans, our dogs, and fixing up a little house in Austin.

A cold look at living and working in the Baltics

Tales of quilting, gardening and cooking from the Kingdom of Chiconia

Looking for answers to life's questions