I’ve decided to share something with you all and let me tell you it has taken more than a little courage. I much prefer to show those nice little things I can feel at least a modicum of pride over. But here it is (in all its ugly glory) my first ever attempt at patchwork!!

Probably some time around 2002, I had taken an interest in my friend Carol’s foray into the world of quilting and as she would bring around her newly acquired fabric and waft it under my nose, I had the overwhelming urge to rush out and buy some for myself. So off I went to the local Lincraft Store and bought a very un-thought out bundle of fat quarters and whisked them back home as fast as I could.

Of course the sensible thing would have been to receive some form of instruction and buy some basic equipment such as: ruler, rotary cutter and cutting mat and choose a nice simple project such as squares. Possibly also get some advice on tonal balance, scale of pattern etc. but pffffft to all that preparation malarky. I had seen a picture I liked of an attic-window quilt and that was enough for me. So off I set with a pair of scissors, an old crappy sewing machine and no idea that a 1/4 inch seam, actually means that the seam has to be 1/4 inch (not just there-abouts!) and here is the marvellous result: 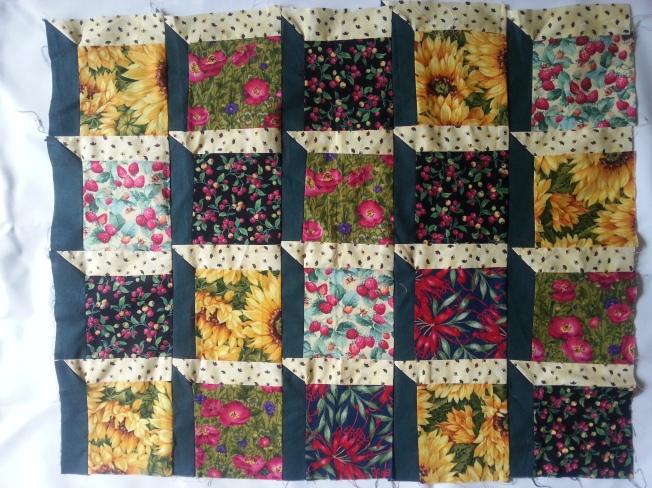 I keep it well out of sight but can’t quite bring myself to get rid of it. If anything its quite good to be able to look back and say “well at least i’ve made progress!” and there is something about the memory of the unbridled enthusiasm I felt at the outset of going out to choose fabrics for my first ever patchwork project that comes back to me every time I look at it so I think it will stay tucked away at the bottom of the drawer and I’ll just take a fond (if slightly cringing) peek at it every now and then.

I was reminded of this ‘unbridled enthusiasm’ thing recently when I read a post on the happy zombie’s blog. She shared a story of the gingerbread man she made out of felt when she was in brownies as a child and how the end result just didn’t live up to expectations!! I have put a link to it here and would urge you to take a look because it just makes me smile every time I think of it!

So here’s to all our little disasters and lets try to keep some fondness for them and not beat ourselves up too much!

Living creatively, brings abundance into your life. I enjoy all forms of creativity, learning new crafts and sharing knowledge. Feel free to look around and I look forward to reading your comments.

I have issues. With crafting. Among other things...

blood, sweat, and glitter y'all

It's all about the crafty

Ali Does It Herself

\ˈprä-JECT-oh-fahyl\ (noun) 1. A lover of projects, especially those derived from scavenged materials and made more beautiful through paint, thread and sandpaper.

crafting,dachshunds including other bits & bobs

home is what you make it
the doodle house

A gleeful account of 2 native Texans, our dogs, and fixing up a little house in Austin.

A cold look at living and working in the Baltics

Tales of quilting, gardening and cooking from the Kingdom of Chiconia

Looking for answers to life's questions